WE ARE
PRECAST BUILDCON 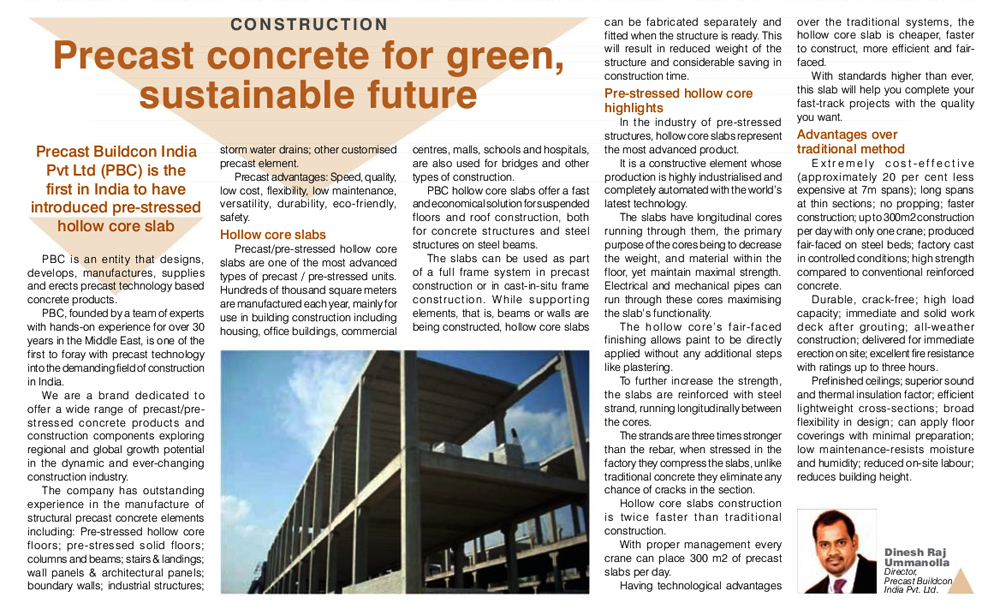 The use of pre-cast building systems instead of conventional methods could cut costs significantly and relieve bottlenecks within the tight deadlines of the construction industry.
Pre-cast concrete is concrete that has been cast into a form that is later incorporated into a structure. A concrete structure may be constructed by casting the concrete in place on the site, by building it of components cast elsewhere or by a combination of the two.
There are many advantages of using pre-cast concrete, chief among them being faster construction, lighter structures, longer spans, no propping, flexibility in design and reduced insurance costs. It is also pre-stressed, firerated and needs less maintenance.
“The use of pre-cast systems speeds up the pace of work and reduces the number of workers needed,” says Dinesh Raj, director of Pre-cast Buildcon India and adds that there is a huge demand for pre-cast products.

Though not available in wide range in India yet, pre-cast products will definitely take a big chunk of the market. Some of the widely used forms of pre-cast concrete in other parts of world are hollow core floor slabs, wall panels, boundary walls, etc

The most common applications of pre-cast in India lie in making Drainage Manholes and Footpath Interlock elements. Hollow core systems that have been around for about three decades in different countries have arrived here, thanks to the boom in the construction industry. The concrete slabs in the required specifications are manufactured in the factory and brought to the site of construction. Fixing of the slab requires just about few workers so that a 500 sq. mt.floor can be fixed in just about a day. Whereas the traditional process takes nearly a fortnight from start to finish, proces of using hollow core slabs finishes in just about a day or two. Hollow core slabs are pre-cast and pre-stressed concrete elements, generally used for flooring.